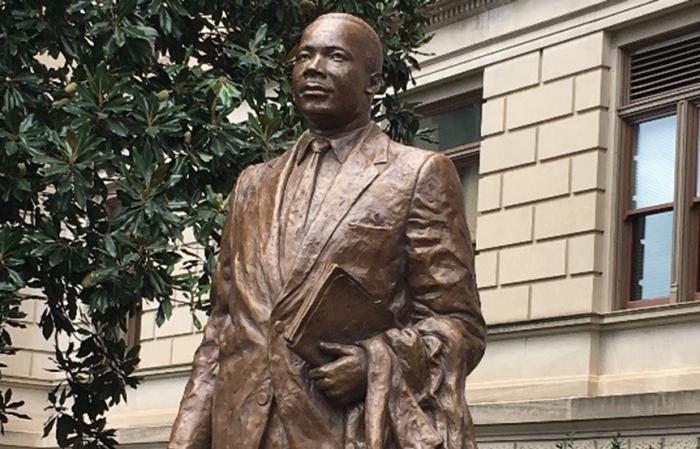 On August 28, Gov. Nathan Deal unveiled a memorial statue of Dr. Martin Luther King, Jr. during a ceremony on the grounds of the State Capitol.  “Dr. King believed that individuals have a duty to serve others and make a contribution to their communities,” said State Sen. Emanuel Jones, Chairman of the Martin Luther King, Jr., Advisory Council.  “Physical memorials ensure his legacy lives on and stand as a lasting reminder of the principles that Dr. King sought to promote.”

The statue – a bronze, 8-foot-tall figure, standing on a 36” pedestal made of Georgia granite – is the culmination of a joint effort to honor the life and legacy of Dr. King. The sculpture stands at the northeast corner of the Capitol and is visible from at least two blocks away, along the boulevard named for the civil rights icon. The project was executed by the Governor’s Office, the Capitol Arts Standards Commission, the Georgia Building Authority, and the Martin Luther King Jr. Advisory Council, which is housed at the Georgia Department of Community Affairs.

The historic project began in April 2014 when Gov. Deal signed a bill authorizing placement of a statue honoring King at the State Capitol.  In March 2015, Gov. Deal appointed State Rep. Calvin Smyre as chief liaison for fund-raising efforts to create and erect the statue.  In June 2016, Atlanta-based sculptor Martin Dawe was announced as the artist for the project.  The Martin Luther King Jr. Advisory Council plays a leading role in the effort to celebrate one of the greatest Georgians.  Supported by the Georgia Commission for Service and Volunteerism at the Georgia Department of Community Affairs, it is the duty of this council to promote the principles of nonviolence, peace, social justice and awareness of the civil rights movement espoused by the life and work of Martin Luther King, Jr.