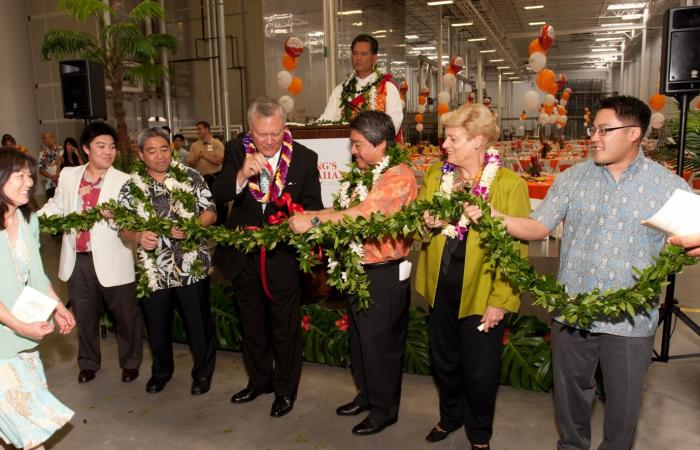 Next time you bite into a King’s Hawaiian Sweet roll, the odds are that it was made in Oakwood, Georgia.

King’s Hawaiian Bakery is a family-owned, bread manufacturing company that is best known for its line of original recipe Hawaiian Sweet Bread products. Founded by Robert Taira in 1950 in Hilo, Hawaii as a small storefront business, today King’s Hawaiian is a producer of dinner rolls, sandwich and snack rolls, and round bread, and currently accounts for more than half of U.S. dinner roll sales. In the late seventies, the company opened its first a commercial bakery on the mainland in Torrance, California to distribute its sweet bread products throughout the U.S.

When the company decided that a second state-of-the-art bakery and distribution facility was needed in order to meet both current demand and future growth, the company chose Oakwood, Georgia to locate a production and distribution facility in the Oakwood Industrial Park in 2011. DCA funding contributed $ 315,000 in REBA funding for machinery and equipment.  This investment was leveraged with $ 48,000,000 in private investment and the creation of 135 new jobs.

Following the success of this initial location, the company undertook an expansion with the addition of three new production lines in 2014. The company added a new line at the existing manufacturing facility and also built an 111,000-square-foot plant adjacent in the Oakwood Industrial Park, to serve both the current and future needs for this operation. DCA, through the EDGE program contributed $ 800,000 to purchase additional machinery and equipment. This expansion will help create 481 new jobs, retain 167 existing jobs with another $ 86 million in private investment. This second phase also received $800,000 EIP/ARC funding for road realignment to accommodate the truck traffic into the new facility. Total estimated project costs for the expansion is $ 87,600,000.