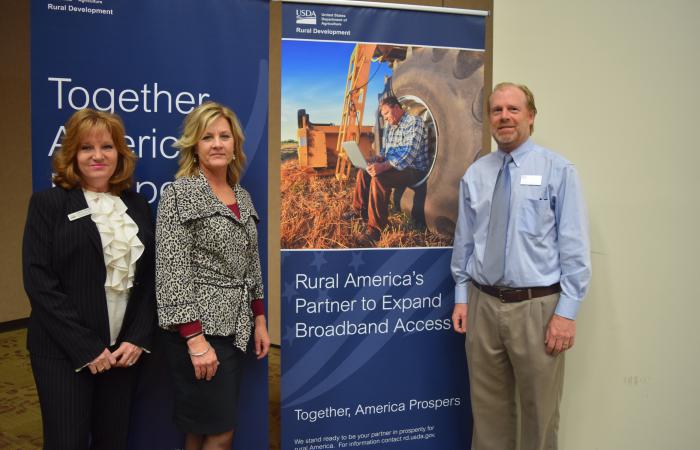 Broadband is essential to education, healthcare, economic development and more, and a workshop held on Dec. 5 in Monroe County provided updates and information about its progress in Georgia. DCA and USDA hosted this event, which focused on the planning process and resources available to help expand broadband infrastructure in communities across the state.

“When we work together, we are going to have a winning team,” said Joyce White, state director of rural development for USDA. “We are all working together to make a difference in the world of broadband across Georgia.”

Rep. Susan Holmes said a third of her constituents do not have internet. As a 7th-generation Jackson County resident, she said people deserve service and pledged to seek out funding sources.

“Until we have broadband covering Georgia, especially middle Georgia and South Georgia, the economic development is just not coming until we have [it],” Rep. Holmes said.

Rep. Robert Dickey said he was glad to get federal and state recognition about the need for broadband. He lived in a small community, which had poor internet service, and understands why access is crucial.

“Whether it’s a large multinational organization, a small business, or even a student doing homework, broadband is so important,” Rep. Dickey said. “It’s not just water and sewer and the traditional things USDA has done. Broadband is the piece that’s missing.”

Rusty Haygood, DCA’s deputy commissioner for community development and finance, echoed similar sentiments about the critical nature of internet access. He said, “It touches everything we do.”

Through partnerships with the Georgia Technology Authority and the Carl Vinson Institute of Government, DCA developed an interactive map, which illustrates unserved areas. A second phase of the mapping project, set for completion by June 2020, will produced a more enhanced map for address-level accuracy.

Many of the panelists shared anecdotes about the importance of Broadband in their communities. Emami recalled how some of his loved ones didn’t have internet access.

Therefore, his goal was to expand internet in Monroe County, and an RFP has been approved for any internet service provider who wanted to play a role in fulfilling that vision.

“We wanted to help move the ball forward. That’s been my motto from Day 1,” Emami said. “We want to show constituents that we are working hard to bridge this gap.”

Snell said the process for internet in rural Georgia is a worthwhile task, although not an easy one. From kicking off efforts in 2018 with research and identifying locations to applying for ReConnect for eight different communities, he said, “At the end of the day, my job is to support local communities.”

Poole, a former Haralson County commissioner, said issues ranging from law enforcement losing a contact due to being in a “dead spot,” an area with poor service, and schools considering renting buses to find hotspots for students doing homework, he has tried to build collaborations with entities to see what they can do to bring rural broadband to counties.

White said, “We all know broadband is essential. It is a necessity. We are helping you put the pieces together for your community."

Governor Brian P. Kemp @GovKemp
2 hours
Throughout the summer, please be aware of the dangers of leaving children unattended in vehicles, and always LOOK A… https://t.co/mO7Qm6EWH1