Six communities recognized at PlanFirst Day at the Capitol 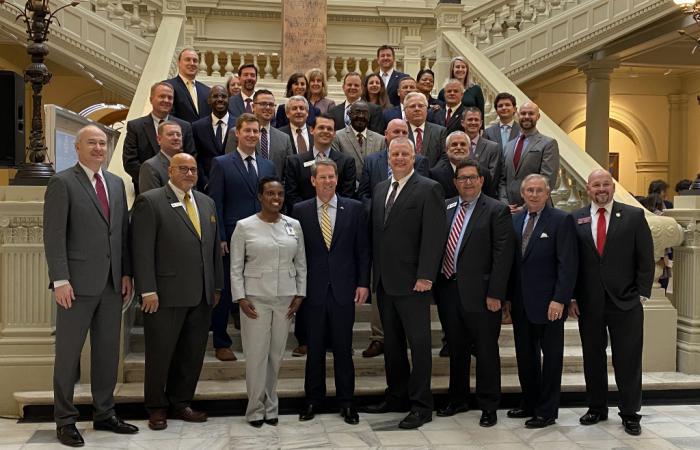 Oconee County and the cities of Dallas, Douglas, Duluth, Powder Springs and Vidalia received PlanFirst designations from the Georgia Department of Community Affairs (DCA). This program recognizes and rewards communities that demonstrate successful implementation of their local comprehensive plan. City officials were honored by DCA and Gov. Brian Kemp on Feb. 4 as part of PlanFirst Day at the Capitol.

In order to be eligible, communities must be a Qualified Local Government, have an approved and adopted Service Delivery Strategy, be current on all required reports to DCA, and have met minimum performance standards for their regional as per its regional commission.

Applicants are evaluated for community vision and goals; leadership; and participation in the development and successful implementation of the comprehensive plan. Participation in the program lasts three years and communities are encouraged to apply for redesignation.

Incentives for the designation include (but are not limited to) statewide recognition, the ability to apply annually for Community Development Block Grant funds, bonus points for specific DCA programs, hands-on assistance from DCA staff for the implementation of community work program activities, and access to the Georgia Environmental Finance Authority (GEFA) state loans at an interest rate that is reduced by 50 basis points (1/2 percent).

DCA staff members Ebony Simpson, Planning Outreach and Training Coordinator; and Tyler Reinagel, PhD, Director of the Office of Planning and Research, welcomed and congratulated the representatives from the six communities who now join more than 30 others across the state with the PlanFirst designation.

“We look forward to working with you,” Simpson said. Reinagel added, “All over the state, we see successful implementation of comprehensive plans which is exactly what we’re here to celebrate and recognize in your respective communities.”

DCA Commissioner Christopher Nunn recalled the 1989 legislation which passed the Comprehensive Planning Act and acknowledged how these communities reflect its importance.

“Today we are here to celebrate not just our ability to plan but our ability to do something with that,” Commissioner Nunn said. “If you are really going to build strong vibrant communities, you have to start with a plan – a vision of where we are going.”

He added, “The six communities we are going to recognize today join communities across the state who really have excelled and taken planning to the next level.”

This community adopted its first zoning map in 1969. Commissioner Nunn said, “They understood the need to plan and envision their future long before the legislature put the [Planning Act] in place across the state.” He also acknowledged the county’s Farmland Protection program in order to protect its rural and agricultural heritage.

John Daniell, Oconee County chairman, graciously acknowledged his predecessors’ vision for the community. He said, “We are very thankful to reap the benefits of folks who came before us.”

Commissioner Nunn lauded the vision of the officials in Dallas; namely the progress at the Silver Comet Trail which he said has been a huge asset to several connected communities across the state.

Boyd Austin, DCA Board Member and Dallas mayor, said city officials have taken a collaborative approach to showcase the attributes of the city. From the Silver Comet Trail to being the first city outside of the Atlanta Regional Commission to be awarded the Livable Centers Initiative (LCI) grant, he said they are focused on drawing people into the city.

Bill Aiken, Planning and Development Director, said Duluth’s comprehensive planning started in the early 2000s. It was one of the first LCIs in the state which Aiken said helped the city council understand downtown development and invest in public amenities. Zoned industrial properties were also purchased which helped to advance city development.

They used consultants to develop comprehensive plans, but the first in-house plan was completed six years ago, and they continue to enhance it today. Aiken said, “We really focused on what the story Duluth is, and [the] council really wanted that document to be an economic development tool. So, we really included what our housing market is, where we want to grow, what jobs we have, and type jobs we want to build on.”

“There are a lot of good things going on throughout Gwinnett County. It is important to carve your niche and define what you want to build,” Commissioner Nunn. “I’ve spent time in communities in and around Duluth that look to you as a model.”

Commissioner Nunn said officials in Powder Springs have recognized and realized the full potential of the PlanFirst program. He lauded its Town Green project which will enhance the downtown area.

“Powder Springs is the place to be,” Henry Lust, Mayor Pro Tem, said. He said under the leadership of Mayor Al Thurman that the city is growing, and the council is all about creating a place where people can live, work and play.”

Tina Garver, Director of Community Development, said it is exciting to work with a city which has focused on planning since the early ’90s and watch more recent plans come through. She added, “In 2014, we updated our LCI which really brought a new emphasis to the downtown.”

Douglas was commended for its PlanFirst redesignation, and Commissioner Nunn said they have recognized and realized the full potential of the program as well as taken advantage of the breadth of DCA resources.

Charles Davis, City Manager, said although challenges occur in city planning that having a PlanFirst designation provides a competitive advantage as well as opportunities to leverage public and private partnerships. Accomplishments include the expansion of gas and water services and the construction of a new City Hall and recreation facility.

“It’s about having a vision for tomorrow,” Davis said. “We are planning for the 50 years. All of the designations open you up for better funding.”

This city was also honored for its PlanFirst redesignation. Commissioner Nunn said, “They’ve done a lot of good work in their downtown. They leverage the technical assistance that [DCA is] able to provide.”

Nick Overstreet, City Manager, said collaboration and support has been key to Vidalia’s success. Teamwork has been essential to not only express their vision for the city but also take action and get things accomplished and “move together as a unified body.”

Commissioner Nunn echoed this sentiment: “It takes time to work as a team and community, so everyone understands what direction we are building on. The time is worth it.”

Governor Brian P. Kemp @GovKemp
28 min
This #MemorialDayWeekend, I encourage all Georgians to keep health and safety top priority. Whether you are at home… https://t.co/Qe0ViNdTYJ