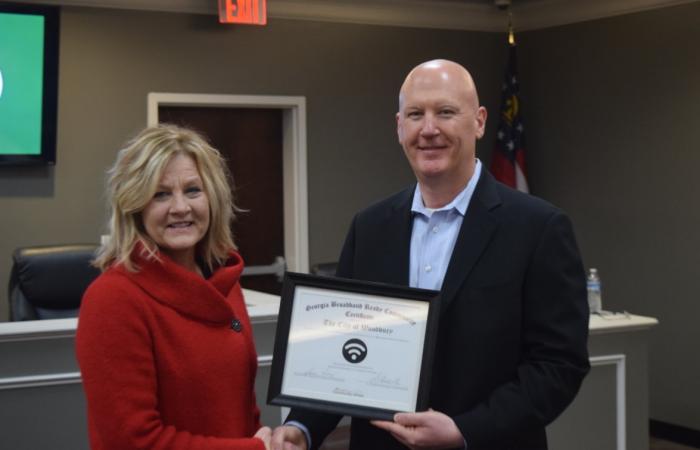 Georgia’s 12 regional commissions are public agencies created and established by the Georgia Planning Act (O.C.G.A. 50-8-32) to assist local governments on a regional basis and to develop, promote, and assist in establishing coordinated and comprehensive planning in the state. The Department of Community Affairs contracts annually with the Regional Commissions to primarily foster effective local and regional planning and implementation of those plans. Our Regional Commission's “Success Story” series highlights these regions by sharing their incredible achievements. You can view all of the communities on our Story Map.

The importance of broadband accessibility is widely known. Its expansion into unserved and underserved areas has been made a priority on all levels of government. Before the pandemic made access to broadband more immediate and pronounce, the City of Woodbury began to study the feasibility of city-wide broadband connectivity.

The lack of access to broadband was identified in multiple sections of the 2018 Joint Meriwether County Comprehensive Plan. It was then listed as a priority project in an update of the City of Woodbury Community Work Program.

The Woodbury Wireless Internet Project Plan was formalized and implemented in a phased approach. The first phase defined the project and established goals, scope, and timeframe. In the second phase, initiation by the city council, community outreach, and the engagement of Broadband Solutions, LLC was included.

A project plan was created in phase three, and broadband deployment systems were tested with success using Ubiquiti’s wireless access points. Once reaching phase five, the project was officially executed. The city is now in the management stage and expanding this model of broadband deployment into neighboring jurisdictions.

The Georgia Department of Community Affairs recognized the City of Woodbury in 2019 as the third Broadband Ready municipality. The city has demonstrated success in the deployment of broadband in rural Georgia and uniquely positioned itself as a community ready for the future.