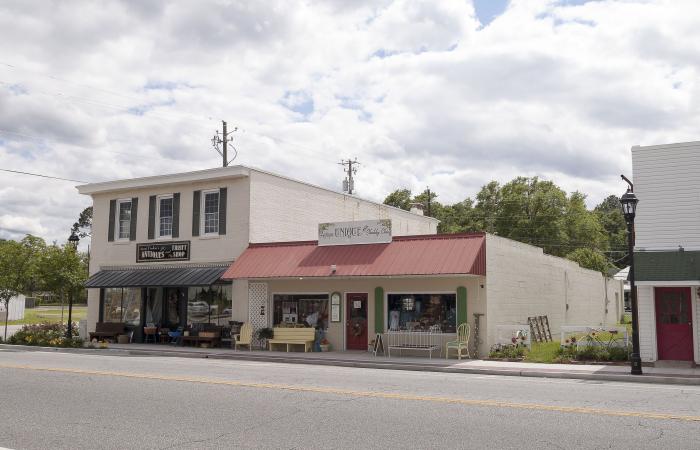 Located 25 miles northwest of Savannah, the Springfield Historic District is centered on the city’s original 1821 gridded street plan and encompasses the intact historic resources of central Springfield. As the county seat for Effingham County, Springfield and was laid out with the courthouse placed on elevated land one block from the commercial area. This layout follows the “Augusta” plan, a defined community type for courthouse towns in Georgia.

The city’s original 1821 street grid remains intact with two significant expansions. In 1907, the Brinson Railway allowed for the connection of Springfield to Savannah and Augusta, which bolstered the city’s commercial prominence for the surrounding agricultural-based economy. And with the post-World War II development boom, which brought substantial residential growth.

The Springfield Historic District is significant in the area of architecture for its representative collection of commercial and residential building types and architectural styles commonly found in Georgia towns from the late 19th to mid-20th century. The commercial area features single-retail, multiple-retail, and retail-and-office type masonry buildings. This area also contains several historic gas stations, churches, the Mars Theatre (1940), the Springfield Masonic Lodge (1960), and the site of the former train depot (demolished c.1976).

The Springfield Historic District was listed in the National Register of Historic Places on April 2, 2021. The nomination was sponsored by the city of Springfield and the nomination materials were prepared by Ray, Ellis & LaBrie.

HPD’s programs include environmental review, grants, historic resource surveys, tax incentives, the National Register of Historic Places, community and technical assistance. To learn more about HPD and its mission to promote the preservation and use of historic places for a better Georgia, visit us online.

Georgia DCA @GA_DCA
2 hours
Residents are praising the City of Powder Springs as it's addressed their transportation concerns in developing saf… https://t.co/pPXwGWe4Yy