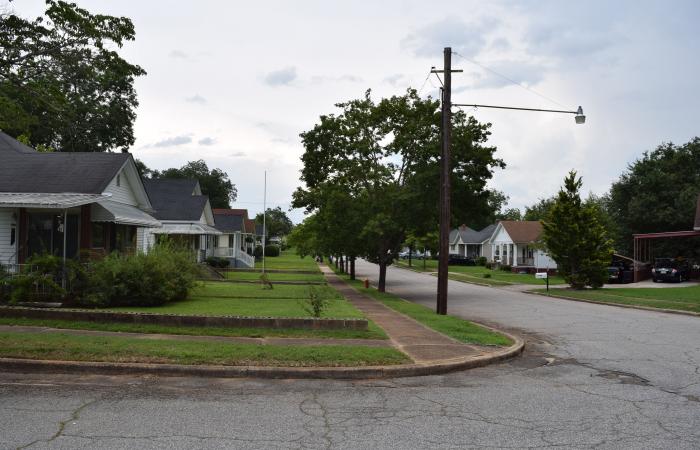 Beginning in the late 1920s, Silvertown developed as part of the Martha Mills Division of the B.F. Goodrich Tire and Rubber Company. Silvertown Historic District encompasses approximately 407 acres of recreational, commercial, industrial, and residential resources. It is now located within the city limits of Thomaston but was part of the independent municipality of “Silvertown” from 1929 to 1958.

In 1926, representatives of the B.F. Goodrich Tire and Rubber Company (BFG) and Fisk Rubber Company toured Georgia in search of a textile mill capable of supplying a massive amount of tire cord. Following this, a deal was struck to create a second mill in Thomaston to meet the high demand for tire cord.

Robert and Company designed Martha Mills in 1926 along with the houses in the accompanying mill village, South Village. During a mill expansion in 1929, Robert and Company consulted with renowned landscape architect and planner, Earle Sumner Draper, on the design of three additional mill villages. These mill villages would represent a shift in industrial town planning practices, as Robert and Company and Draper sought to create a “total-living” environment equipped with the most modern village amenities and plentiful greenspace.

The Silvertown Historic District is significant in the areas of community planning and development, landscape architecture, and architecture. It acts as an excellent example of a planned, company-managed industrial community associated with the expansion of Northern-based industrial operations into the South. Furthermore, it exhibits the evolution of theories and design strategies for industrial town planning and management that occurred in the late 19th and early 20th centuries in America.

The district constitutes one of Georgia’s and the South’s largest and most complete examples of a planned industrial community, representative of the work of Robert and Company, Earle Sumner Draper, and Atlanta-based architect Richard Kennon Perry, who designed houses for the 1936-1937 expansion of Silvertown’s West Village. The district’s contributing Bungalows, American Small Houses, and community landmark buildings exhibit distinctive architectural characteristics of dwellings and community buildings found in Southern mill-towns during the 1920s and 1930s.

The Silvertown Historic District is additionally significant in the area of industry for its association with Robert Edgar Hightower, Sr. Hightower was highly influential in the development and management of Silvertown as a cohesive industrial community in the South. Today, the district is the most complete example of the lasting impact he had on the community of Silvertown and, subsequently, Thomaston.

HPD’s programs include environmental review, grants, historic resource surveys, tax incentives, the National Register of Historic Places, and community and technical assistance. To learn more about HPD and its mission to promote the preservation and use of historic places for a better Georgia, visit us online.

Georgia DCA @GA_DCA
9 min
The Douglas Fire Department is giving peace of mind to its community with its new ISO rating: Class 2. This rating… https://t.co/pcvc3yfnld