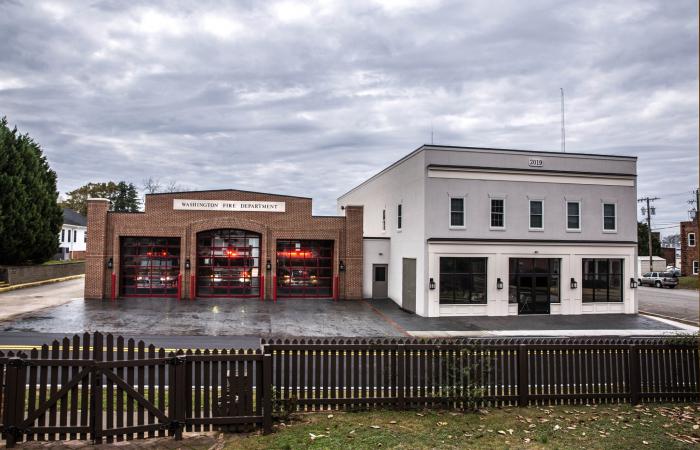 Several departments in the City of Washington had one objective: To increase operational efficiency and boost employee morale by identifying and replacing unreliable, dangerous, and expensive-to-maintain equipment in Public Works, Electric, Sanitation, Water and Fire Departments. This initiative was identified in the 2014-2024 Washington Wilkes County Unified Comprehensive Plan and carried through in fiscal years 2015-2019.

The City Fire Department was until 2019 headquartered in a 1950s metal building that had formerly housed a furniture manufacturing shop. The building had not been properly upgraded for living space when it was converted in the 1970s to the fire station. Paneling covered the metal walls with no insulation and the floor lacked a proper vapor barrier, leading to mold and mildew problems. Lack of space meant no privacy for the crew, no room for expansion and barely any training space.

In addition to substandard facilities, the Fire Department vehicle fleet was underequipped. In FY 2015, Fire Chief CJ Gilland secured a grant for the purchase of a much needed 100' Pierce Platform ladder truck, with over 95% of the cost of the truck being paid from FEMA Assistance to Firefighters Grant (AFG) program. The City was also able to secure a new 2018 heavy duty rescue truck through the 2017 SPLOST Intergovernmental agreement.

In FY 2017 and 2018, the mayor and city council, recognizing the importance of ensuring that firefighters had safe and efficient living quarters, began a facilities upgrade program. Over the subsequent 24 months, the fire station was expanded and renovated to its current 8,000-square-foot size with training space, a community room, offices, kitchen, two full bathrooms, seven bedrooms and a gym.

Resulting from these efforts, the Fire Department was able to go through the process of evaluation by the Insurance Services Office, and were able to have the rating within the city limits dropped from a 3 to a 2, and in the county from 9s and 10s to, in most cases, a 6. The new fire station opened officially on Dec. 18, 2019, with a ribbon cutting and public open house. Ceremony attendance was double what was expected.

The City Sanitation Department underwent an overhaul during the same timeframe. In response to trucks that were out of date, dangerous and inefficient to operate, the City retired, replaced, and innovated to achieve better operational efficiency. In 2015, the sanitation department replaced an outdated rear loading trash truck with a new front load truck and a fleet of custom designed UTVs, and streamlined operations with the placement of trash bins in key locations, and addition of a new recycling facility.

For residential routes, a fleet of UTVs was retrofitted with dump beds and side arms to lift roll out containers. The vehicle upgrades were designed by Mayor Ames Barnett, a civil engineer and owner of a construction company, and are a one of a kind.

At present, the trash truck runs the commercial routes, and picks up from centrally located dumpsters that are filled by the UTVs. This upgrade has resulted in a savings of $125,267 since 2015, as it saves on gas, and fewer operators needed to be replaced as they retired. Efficiency measures within garbage collection meant reduced overhead cost for the same level of service.

The recycling center, opened in 2018, saves on costly door-to-door pickup by giving residents a drop-off location. This allows freedom of use rather than scheduled pickups.

Other departments benefitting from the equipment upgrade program were Electric, Wastewater, Public Works and Code Enforcement. In 2015 and 2017, the Electric Department received a new pole truck and a new bucket truck; and a new Ford F150 was purchased in 2016 for service personnel to drive meter routes. The Water department received a new jet vac which saves labor on projects that require digging, and a new sewer truck that eliminates the need for personnel to climb into the sewer or dig up clogged sewer lines with a tractor.

Ford F150. Given that Wilkes County is 475 square miles, some service calls within Wilkes County could be a total round trip of 70 miles, and the department has had days that a total of 350 miles were logged.

Public support was widespread. As efficiency of internal operations improves, so does ease of use on their public-facing side.

Governor Brian P. Kemp @GovKemp
4 hours
Monday, flags across the State of Georgia will fly at half-staff in honor of the men and women who made the ultimat… https://t.co/pDVEenA4TM