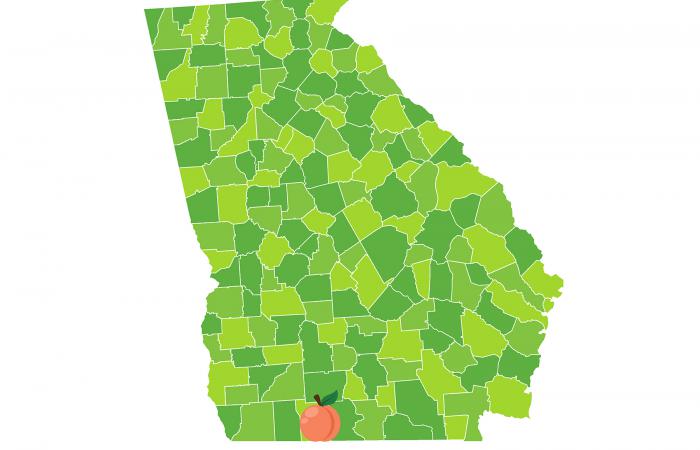 The W. Jackson Streetscape Project is a completed, success story that enhances Thomasville’s downtown and implements contextual improvements in “The Bottom.” The project comprises the three blocks of W. Jackson Street between Madison Street and Remington Avenue. This corridor serves as the primary vehicular “gateway” from Tallahassee and is located adjacent to the downtown core.

Located in “The Bottom,” so named because of its sloping topography, this historically African American and Jewish commercial corridor served as a vibrant community center from the early to mid-1900s. From the 1970s, commerce declined, and by the early 2000s not much was left in the area.

It was a prime candidate for revitalization. In 2014, after gathering input from more than 120 community members and much deliberation, the partner organizations approved a vision plan for transforming The Bottom into a creative district. The plan revolved around building an amphitheater at the trailhead for a new multi-use trail system connecting the city’s neighborhoods.

As a result, the Bottom is experiencing increased development pressure and interest. To further encourage positive changes, the street improvement project was undertaken.

The public engagement and conceptual design phases were completed in December 2017. The City Council approved the design concept and supported the project moving into costing and the engineering document phase.

The project went to bid in 2018 and preparatory work to move utility lines and to augment water service got underway. Streetscape construction took place May-November 2019: On time and on budget.

A focus on community engagement formed a strong base for the entire project, and 13 opportunities for public input were provided. These included online surveys, walking tours, roundtable discussions, and a public design charrette. Handheld voting technology was utilized, and more than 80 papers and online surveys were completed, capturing individual preferences and documenting trends.

The transparent design process sought input from citizens and resulted in an informed proposal that addressed the chief concerns of the community. The public engagement garnered stakeholders and provided a new level of transparency and communication for a project in the public realm.

Activity was scheduled to limit impacts on businesses and a proactive, daily communication plan during the construction phase kept stakeholders up to date as the work progressed. City staff stayed on site for the entire project construction period, not only to oversee work and to make field adjustments as necessary, but principally to communicate with all the merchants daily. This communication kept merchants apprised of construction activities planned each day that may impact, even if only temporarily, to their businesses.

This communication was essential to the success of the project. It instilled confidence in the merchants that the project was progressing according to schedule and allowed the City to get their perception and feedback on a daily basis.

The project replaced deteriorating, trip hazard sidewalks with steep cross slopes between the building and curb. High curbs were lowered to allow better accessibility from the street onto the sidewalk. Handrails and steps were incorporated to better address elevation differences between the street and buildings.

Prior to the project, this section of street had little shade. Beneath the sidewalk, tree cell structures were installed to provide tree root growth space to support long-lived and substantially sized shade trees.

Unsightly overhead power and communications lines that lined both sides of the corridor were removed. In the year leading up to the project’s construction, the City re-routed overhead lines and laid the infrastructure in place that would enable the elimination of the overhead power and communications lines. Installation of planting beds and trees to provide beauty, soften the hardscapes and to buffer pedestrians on the sidewalk from cars and traffic.

Six safe pedestrian crossings were added, spaced along the street, including mid-block and intersection points. All buildings are fully ADA accessible through sidewalk crossing and building entrance improvements.

Planted bulb-outs at crossing points along the street limit the distance for pedestrians to cross. Pedestrian crossing signage was added.

The street trees and bulb-outs visually narrow the road which calms traffic, decreasing speeds and making the street safer overall. A raised intersection plaza at W Jackson St. and Stevens St. provides a crossing area for pedestrians along the Community Trail route.

The bulb-outs provide a protective buffer to on-street parking. Access to off-street parking was improved during the project and signage directing to parking areas was implemented.

Metal handrails were installed that are contextual with the traditional style of the building architecture and also in keeping with the industrial and warehouse past of The Bottom. Planting beds and street trees create an inviting environment and soften the hardscapes.

The historic granite curbing was maintained and the brick paving in the streets were kept and repaired. Pedestrian lighting contributes to the safety and comfort of pedestrians. The selected fixtures are in keeping with the context of the historic setting.

In celebration of The Bottom and its African American heritage, a brick wall was erected to identify the area and to provide information about the rich history of the street. At the southern edge of the streetscape, a green gateway into The Bottom visually announces the arrival into the Creative District. A large center planting bed between the lanes of traffic, hosts flowering shrubs and oak trees, that once mature will offer a graceful threshold into the downtown. It signals a sense of place and arrival through a vibrant green gateway.

Measuring the project’s economic impact so soon following its conclusion is not complete. However, the private investment response to the new streetscape has been immediate. New commercial tenants have moved into this section of street.

The renovation of three historic buildings, including two new restaurants, has followed, bringing new and revitalizing energy to the corridor. The county and city will likely see increases in property values and sales taxes from these private investment improvements.

The overall project intent is to use public investment to spur private investment. By creating a welcoming, interesting, and comfortable space in the public realm, pedestrians are encouraged to spend time along the corridor.

Response to the completed streetscape has been overwhelmingly positive. Additionally, the open and transparent nature of the project from concept to completion won trust in the community.