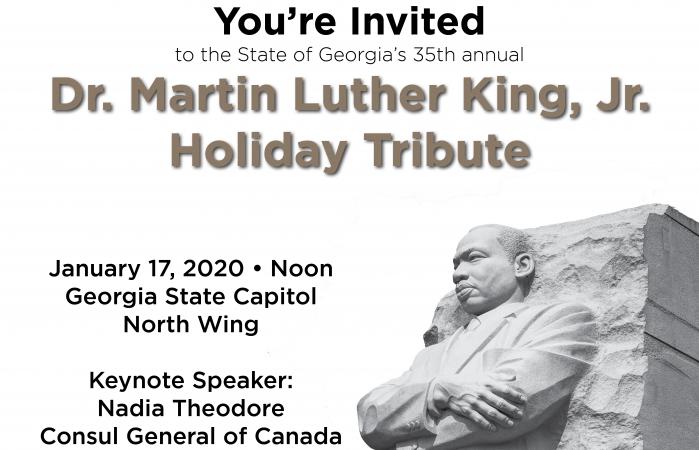 A keynote address from the Consul General of Canada and the unveiling of an interactive display will be two of the many highlights of the 35th annual Dr. Martin Luther King, Jr. Holiday Tribute from on Jan. 17 from noon-2PM at the Georgia State Capitol.

Gov. Brian Kemp said, “Dr. King preached a message of love and respect for all people. This 35th commemorative occasion will reinforce his powerful message and illustrate how Georgians live and work every day to honor his legacy.”

Nadia Theodore, Canadian Consul General, will deliver the keynote address. She said Dr. King is held in high regard in Canada as parents and educators routinely employ his speeches and life story as teaching tools.

“Although Martin Luther King Jr. Day is not a national holiday in Canada, many civil society organizations, and local governments, including Toronto and Ottawa, commemorate it with events and speeches celebrating his legacy,” she said.

Theodore said she intends to focus on his connections to Canada with special emphasis on a series of lectures that were broadcast across the country a few months before his death as well as illustrate the continued global resonance of his philosophy. She will also share personal anecdotes about what Dr. King has meant to her throughout her career journey as a Canadian diplomat.

“As a Black woman appointed to be Canada’s senior diplomat in the U.S. Southeast, based in Atlanta, I aspire to the example of leadership, integrity and fortitude set by Dr. King, and embrace his commitment to the pursuit of equity and human rights, not for any one marginalized group, but for all people,” she said.

Sen. Emanuel Jones, chairman of the Martin Luther King, Jr. Advisory Council, which is housed within the Georgia Department of Community Affairs, said a chance conversation at a luncheon with Theodore enlightened him even more on Dr. King’s global impact.

“She shared a story about people who immigrated from the Underground Railroad in Savannah to Canada. We share a similar history,” he said. “I was intrigued by her knowledge of history and how she spoke boldly about people of color and the history of people in Canada.”

After recognizing this connection between Georgia and Canada, Sen. Jones was moved to ask Theodore to deliver the keynote speech. “Not only was Dr. King a native son of Georgia, but an icon in the U.S. His legacy is just as strong internationally,” he said. “I’ve been to a lot of countries, but his message is still relevant.”

Attendees will also hear from Canadian resident Janet Somerville, who worked with Dr. King in the 60s, via a pre-recorded video message in which she will reflect of her time with him. In 1967, she asked the minister to record the Canadian Broadcasting Corporation’s Massey Lectures, and she was later invited to write speeches for him.

The 2020 event will also include the unveiling of an interactive display, part of the Capitol Museum program, located on the fourth floor of the Capitol building. In 2018, Senate Resolution 686 outlined the vision for the video exhibit, which will showcase Georgia’s role in the Civil Rights Movement, women’s suffrage, and more from the 1920s to the 1970s. The Martin Luther King Jr. Advisory Council collaborated with the Center for Civil and Human Rights on this initiative. Consisting of three 65-inch screens, visitors will be able to participate in a virtual learning experience focused on decades of civil rights history.

Additionally, Rev. Bernice King, Dr. King’s youngest daughter, will be in attendance and awards will be presented. Given annually as part of the state holiday tribute program, these awards are designed to recognize members of the community that exemplify Dr. King’s commitment to helping others through generously serving to advance the pursuit of equality, justice and civil rights for all Georgians and all people. Among this year’s award recipients are Atlanta Mayor Keisha Lance Bottoms and the late Juanita Abernathy, renowned organizer, advocate and wife to Ralph David Abernathy, Sr.

Governor Brian P. Kemp @GovKemp
1 hour
This #MemorialDayWeekend, I encourage all Georgians to keep health and safety top priority. Whether you are at home… https://t.co/Qe0ViNdTYJ