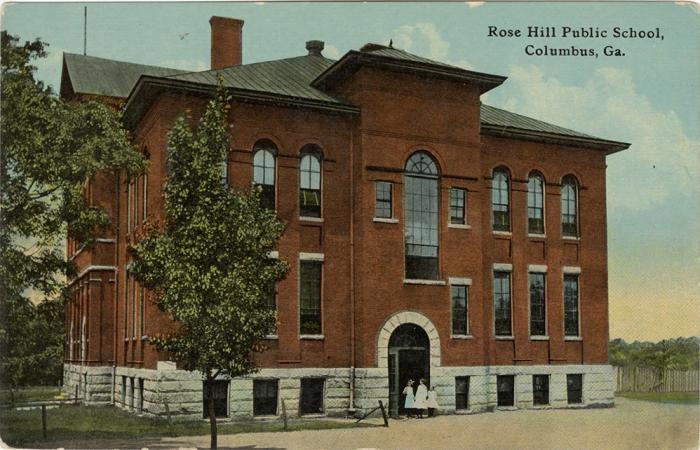 For more information on the listings, see below:

The Rose Hill School was constructed in 1900 by the Columbus Public School System. It is a representative of the early 20th century establishment of public-school systems in which cities erected important buildings for educational purposes. Prominent local architect T. W. Smith designed the main school building in the Romanesque Revival style – symmetrical massing, broad and smooth wall surfaces of masonry construction, and round-arch forms found in window and door openings. In 1954, local architect E. Oren Smith was hired to design a cafetorium for the school and did so in the International Style. The building was a one-story, minimalist rectilinear building with a flat roof, uniform red brick veneer and metal awning-type windows with minimal exterior reveals.

The Rose Hill School was listed in the National Register of Historic Places on March 30, 2022. Oracle Design Group, Inc., sponsored its nomination while nomination materials were prepared by preservation consultant Regina Brewer.

Master Golf Course architect George W. Cobb (1914-1986) significantly redesigned the Coosa Country Club Golf Course in 1962. The original course, laid out in 1910, was designed before the availability of large earth-moving equipment and needed an update. Cobb was the consulting architect at the Augusta National Golf Club at the time making him perfect for the job.

He formally landscaped the Coosa Country Club Golf Course, created a water feature and added cart paths. His design envisioned and delivered an experience for golfers akin to a walk through a park. It was a course without obvious gimmicks, unnatural shapes or materials for the hazards and greens. Cobb’s work is an exemplary combination of two different golf course design styles - Links and Parkland. His design philosophy is evidenced in this stylistic approach which focused on player accommodation amongst various skill levels and the enjoyment of golf as a therapeutic endeavor.

Coosa Country Club Golf Course was listed in the National Register of Historic Places on April 15, 2022.

Pope’s Museum is the singular art environment of self-taught artist Laura Cordelia Atkinson Pope Forester (1873-1953), who lived and created on the property for almost six decades. Forester began large-scale sculpting around 1900 and by 1917, she created and installed the first statue at her home, an 11-foot-high monument honoring World War I soldiers.

From the 1920s until her death in 1953, Forester opened her property to the public. Visitors viewed realistic human-form statues modeled from her own face and those of her neighbors. They all celebrated significant figures in Georgia and military history as well as popular culture. She imbued her work with feminist and patriotic leanings, and is one of few documented female folk artists of the 20th century. Her work has been recognized by the Library of Congress, the Georgia Council on the Arts and Humanities, and the High Museum of Art in Atlanta for its contribution to the landscape of Georgia and southeastern folk art.

Pope’s Museum was listed in the National Register on April 20, 2022.

The Emery Thomas Auditorium is the only remaining building of the Dublin 4-H Center, Georgia’s first and only 4-H Center built exclusively to serve African American youth. The Emery Thomas Auditorium was constructed in 1957 as an addition to a flourishing campus established just under two decades earlier. The agricultural knowledge and life skills fostered by the 4-H program were practical education tools intended to help improve living conditions for rural families. It paired training in leadership, health education, first aid, civil defense, and 4-H club project work with recreational activities such as swimming, baseball, boxing, horseshoe pitching, and relay racing – a combination of practicality and fun. The center offered a camp-like setting accommodating multi-day visits for boys and girls. The formation of the Dublin 4-H Center was the vision of state 4-H and community leaders including Laurens County’s first African American Extension Agent, Emery C. Thomas (1906-1978). At its height, state agricultural extension agents at the Dublin 4-H Center conducted more than 150 meetings for roughly 5,000 youth annually. The popularity of the Dublin 4-H Center can be directly attributed to increasing enrollment in Georgia’s Negro 4-H program. The construction of the Emery Thomas Auditorium was a direct reflection of that growth.

Emery Thomas Auditorium was listed in the National Register of Historic Places on May 10, 2022.

The City of Dublin sponsored the nomination with nomination materials prepared by Rebecca Fenwick of Ethos Preservation.

The Savannah Beach Town Hall and Auditorium is the first significant public facility on Tybee Island. It was completed in 1939 as part of the federal government’s Depression-era Works Progress Administration (WPA) program. It has served as city hall for more than 75 years, being the center of Tybee Island community life. Savannah Beach Town Hall and Auditorium housed municipal offices, hosted public meetings, served as a polling place, and provided citizens with a public facility to gather for meetings, entertainment, and recreation. With it accommodating up to 500 people, the historic town hall and auditorium had frequently use via: dances, receptions, plays, presentations, dinners, socials, working and meeting spaces for community betterment organizations such as churches, schools, the public library, fraternal societies, political groups, and youth organizations.

Savannah Beach Town Hall and Auditorium was listed in the National Register of Historic Places on May 27, 2022.

HPD’s programs include environmental review, grants, historic resource surveys, tax incentives for rehabilitation, the National Register of Historic Places, and community and technical assistance. To learn more about HPD and its mission to promote the preservation and use of historic places for a better Georgia, click here.

Georgia DCA @GA_DCA
1 day
Residents are praising the City of Powder Springs as it's addressed their transportation concerns in developing saf… https://t.co/pPXwGWe4Yy

Governor Brian P. Kemp @GovKemp
12 hours
As we continue to work hard every day to bring jobs and opportunity to every corner of our state, I'm proud that Ge… https://t.co/vwRGtNHyAv