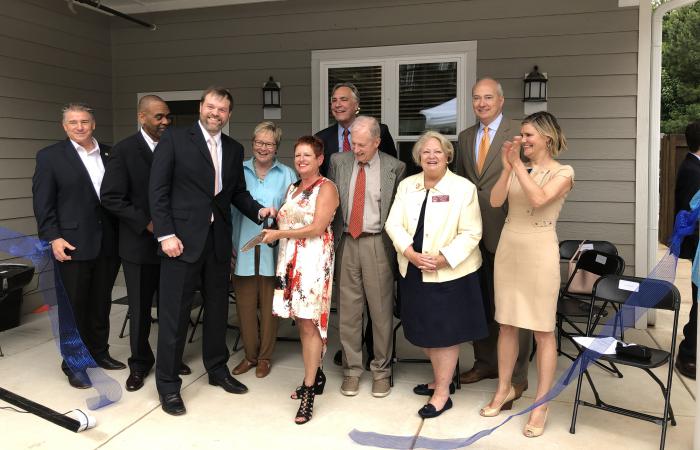 Commissioner Christopher Nunn and DCA staff joined legislators and city officials on June 12 for the grand reopening of Rosalynn Apartments in Chamblee. A $3.4M renovation began in June 2018 and included apartment upgrades such as new floors and appliances. The facility, originally built in 2000, was developed for adults affected by homelessness and mental illness. Residents in the 56 units have access to laundry facilities, an activities center and courtyard.

The apartment’s namesake is former First Lady Rosalynn Carter who continues to be an advocate for this particular population. Her involvement dates back to 1987 when she became involved with 3Keys, an organization whose motto is, “Hope Begins with Housing.” According to its website, 3Keys focuses on Atlanta’s homeless population and believes individuals also living with mental illness can be empowered via housing, help and hope.

“I want to thank the residents. You give us a reason to be here today,” Commissioner Nunn said during his remarks. “This is an exciting day, a beautiful property, and we are proud to be a part of it.”

He also highlighted the collaborative effort with state agencies and the philanthropic community for the continued success of Rosalynn Apartments. DCA programs such as Shelter Plus Care and State Housing Trust Fund for the Homeless have been instrumental in the sustainability of the complex.

An incredibly poignant moment of the occasion involved a special dedication to the 3Keys Founder Patricia Clifford who died in September 2018. David Lambrecht, 3Keys Board of Directors Chairman, said Clifford formed significant partnerships with private and public sectors to develop housing units for this specific population. To date, 3Keys has six properties in the Atlanta area.

The Administration and Recreation Center was named was in Clifford's memory, and members of her family were present for the honor. Her sister, Jeanne Sawyer, said, “3Keys was [Pat’s] heart. She’s doing an Irish jig knowing she is being honored today. Our family thanks you for your commitment and love for this mission.”

Georgia DCA @GA_DCA
1 hour
Applying for rental assistance through the Georgia Rental Assistance program can stop an eviction. Make sure to c… https://t.co/J4QNcoEttx