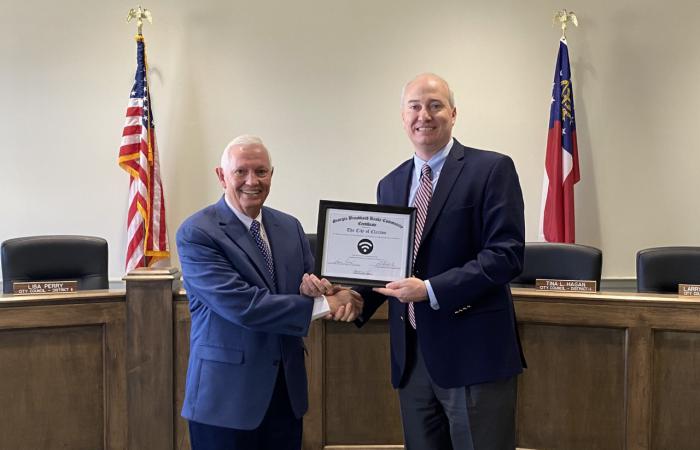 Claxton Mayor Terry Branch said although his city did have internet access, the speed was not desirable. There are also businesses that had fiber-optic access, and he wanted to extend that service to residents.

“Our Economic Development Authority (EDA) was working with our county government and local utility providers on planning for broadband in the rural parts of our county when the legislation was discussed,” Mayor Branch said. “At that time, there was also discussion about acquiring Broadband Ready Community status.”

The mayor said the designation would emphasize the significance of access for Claxton citizens. He added, “The greatest need for broadband is in our rural areas of the county; however, we wanted to promote the importance of broadband and let business and industry coming to our city to know that we are Broadband Ready!”

At the designation ceremony on Feb. 21, Mayor Branch thanked the City Council and recognized Adam Kennedy, Claxton-Evans County EDA director, for leading the city’s efforts in earning the designation. Kennedy recalled how broadband was a major focus when he began in the director’s role and that this designation was a big day for the community.

“Some work had already been done with our local utility companies as far as getting broadband ready out into the rural parts of our community,” Kennedy said. “During that time, we’d heard about the designation process.”

He said Mayor Branch and the City Council were extremely supportive of this effort and noted how education and agriculture are two of the many areas, especially in rural communities, that could be positively affected by broadband access.

“We want to let everyone know that as an entire community, city and county joined together that we understand the importance and need for broadband,” Kennedy said. “With our partnership with Pembroke Advanced Communication, we are making strides that a lot of other counties are not.”

USDA recently invested $5M in broadband for rural communities for McIntosh and Evans counties, and Pembroke Telephone Company will utilize $4M of those funds to provide high-speed internet for nearly 1,000 households, 20 farms and 15 businesses.

Christopher Nunn, DCA Commissioner, lauded Claxton officials for their inclusion of broadband in their long-term community planning efforts. He recalled the days of the internet’s early emergence, noting the major differences between the past and the present, everyday reliance on online access to conduct business.

“This is truly how we engage in the community,” Commissioner Nunn said. “Many of you rely on broadband to conduct your business or perhaps even more complicated services like public safety or healthcare or education.”

He said providers and community leaders are all asking the same question: How can we get people – including the estimated 2 million Georgians without high-speed Internet – connected to a “truly essential infrastructure”? Commissioner Nunn said Claxton has taken a step in the right direction.

Mayor Branch encourages other communities to apply for this designation in order to make a statement of support and promotion of internet access for all areas of the community. He said the city and county’s dual designation illustrates “a united front of promoting the importance of Broadband.”

Explore Georgia @ExploreGeorgia
22 hours
Paper maps are making a comeback! Did you know you can get a FREE Georgia road map at any of our Visitor Informatio… https://t.co/rwNF2BhPsn