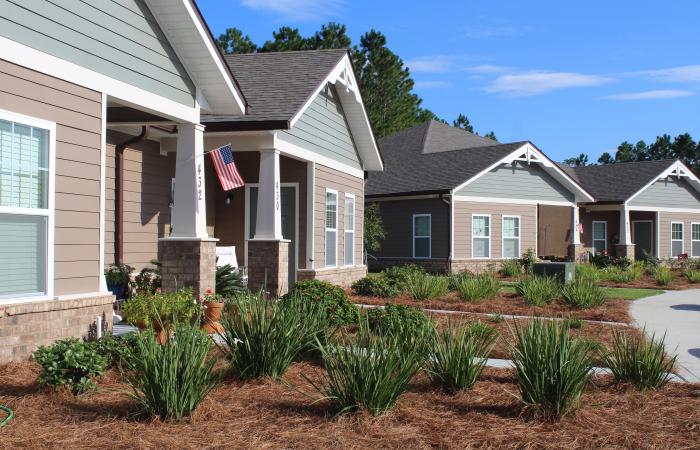 In 2017, DCA allocated tax credits for The Village at Winding Road (Phase II) in St. Marys. This property boasts senior-specific features such as patios, one-story villas, handrails, and in-unit washers and dryers. A business center, community room, and gym are also available for use.

The senior citizens there describe Winding Road as a safe place to live that feels like family. For Tara Friedman, property manager, the sentiment is the same – her mother also lives in one of the units, and she has become close with the residents, right down to knowing their idiosyncrasies.

“My mom, for example – I know not to even call her before 10:00 in the morning because she’s a night owl,” Friedman explains. “Now there are some morning people, but not all of them are that way.”

Although some of the residents are 55 and younger, Friedman said the majority are much older. Although some units are for families, she said 98% of the people living there are senior citizens. Phase I and Phase II of the construction were in high demand; Phase I had a waitlist dating back to 2013. Demand for occupancy remains high, and they rarely have a vacancy.

“They love it,” Friedman said. From beautiful landscapes, including a lake and pond, to proximity to the hospital, pharmacies, and doctor’s offices, Winding Road was built with seniors’ needs in mind.

The property is also on the Georgia-Florida border at Exit 1, so some of the occupants move to St Marys to secure their spot. With a regular hurricane season and higher rents, Friedman said many Floridians find the coastal town an attractive place in which to settle in their older ages. The camaraderie among them is also admirable, and Friedman said they are protective of each other and make efforts to get to know their neighbors and their habits.

“You know, they’re really the first ones to say, ‘You know what? I haven’t seen that lady in a day. She’s going to Publix on Thursday,’ or something like that,” she said.

Another special quality of the area includes a significant military presence. Friedman said many are Navy veterans with some retired. Also, many adults move their parents to the area so they can be closer.

“So it just depends; every situation is a little bit different. Most of the time, unless they have to go to a nursing home, pass away, or need to move to be closer to where their kids are — to where they can be looked out for — they typically don’t leave,” she explains.

The amenities like villas and walk-in showers are valued assets to the residents. Friedman adds, “What people love most about this particular property is the front porches.”

The quality of services is also a benefit that adds to a sense of security to the older population. Everyone who lives at Winding Road has 24/7 access to maintenance services, monthly pest control, and routine landscaping to the grounds. Friedman said this also adds to the ease of living since they are no longer responsible for maintaining these tasks as they would be if they were still living in houses.

“Seniors don’t always feel safe in the family communities because most of the time, you’re getting a wife whose husband has passed on and she’s now trying to live on her own. And living next to teenagers or young adults that — you know, it can be challenging,” she said. “It’s hard enough feeling safe as a single woman, but when you’re elderly or you feel like you can be taken advantage of. [In] this community, what you’re going to hear over and over again is: ‘I feel safe.’”

Living on a fixed income is also common among older adults, so having housing that is both safe and affordable is essential. Friedman said although “tax credits” might not mean much to them but being able to live comfortably and within their financial means is essential. Without the tax credit program, she estimates rental rates would range between $1,500-$1,700 per month.

“There is a desperate need for housing in Camden County,” she said. “We’re overrun with family property but there’s just a real big need for senior community in this particular area.”

As she thought about it more, Friedman acknowledged that the issue goes beyond Winding Road. Issues facing seniors including major life transitions and health challenges, which were exacerbated due to the pandemic, continue to reflect the need for more housing specifically designed for their ages and lifestyle.

She said seniors really appreciate these types of communities and treat it like home. “They know, usually, it’s going to be their last place they can live independently. It’s really special.”

Georgia DCA @GA_DCA
12 min
The Douglas Fire Department is giving peace of mind to its community with its new ISO rating: Class 2. This rating… https://t.co/pcvc3yfnld