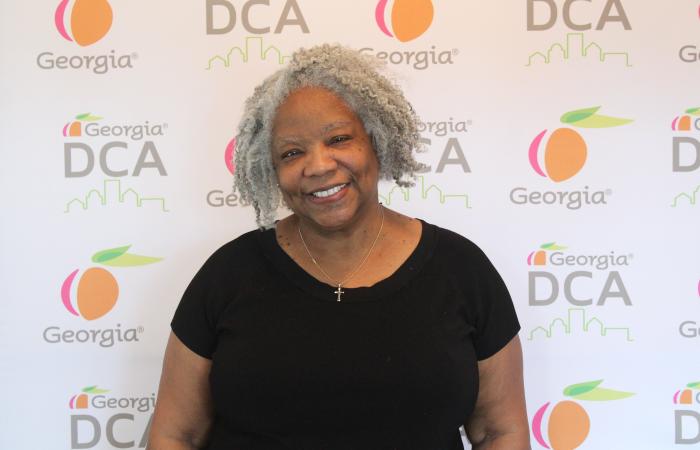 The Georgia Department of Community Affairs believes we all share a common need for shelter. That's why we pride ourselves on laying the foundation for safe and affordable housing. The Housing Tax Credit program makes that goal manifest by offering tax incentives to properties that devote all or part of their units to low-to-moderate income residents. Countless residents, owners, and developers across the state are Breaking New Ground, reinventing themselves in their homes, and seizing the opportunity to begin the next chapter of their lives in safety and comfort in developments such as The Village at Winding Road.

Peggy Jackson is originally from Texas but moved to Georgia more than 35 years ago as part of the travels of a military family. She has raised her children here and decided to remain in the state after they transitioned into adulthood.

“It’s a lot quieter, peaceful [and has] a slower pace,” she said. She sold her house following a divorce and moved into an apartment. She said pickings were slim.

“The one I was in was super tiny, closed in, no windows,” she recalls. A neighbor told her about Winding Road: “Get down and get your name on the list!” is what Jackson was told.

In need of some peace and quiet, away from young families and around people closer in age and with similar lifestyles, Jackson took her neighbor’s emphatic advice. She was approved a few months later and regarded her new residence as “a godsend.”

“Things were happening – changing lives, children leave, and it was just an adjustment in life. And this place was everything I could even imagine,” Jackson said. “Being here was a blessing to me. I really have sanity and peace and serenity here because of my age.”

The apartment she moved into “took her breath away.” It was much bigger than her former residence, which was plagued with mold and leaks. Winding Road, the hardwood floors, and ready-to-use appliances gave her a sense of relief.

Like many senior citizens, Jackson is living on a fixed income in retirement, and called the monthly rates at the affordable property “perfect,” with the added convenience of being able to pay online. The gym and walking trail are some of her most-appreciated amenities.

Additionally, she said the community is truly a village. They share likes and dislikes – including an occasional political debate – but she said they are a close-knit crew who have each other’s backs.

“It’s so peaceful that sometimes I forget to lock my car at night,” she explains. “And there’s always someone – you know, at our age, some will stay up at night, some will get up early – [being] watchful.”

Affordable housing for senior citizens is something Jackson said should be more accessible in Georgia. Without communities like those developed through the Housing Tax Credit program, she believes there would be a lot of homeless older adults.

She reflects on the time in her life after her divorce and admits that, although it was a sad situation, that she did not want to return to Texas. Her new community was both a solution and a new beginning. Without it, leaving would have been her only option.

“To have a neat, clean safe place – it’s just hard to come by. You don’t have to worry about loud noise [or] anyone breaking in,” she said. “You have peace of mind. You [are] able to sit and watch TV with the windows up at night [if] you want to. I thank God for this area. I thank God for the people that work here.”

She said the staff is sweet, considerate, and mindful – something Jackson said is good for seniors who can sometimes fall victim to loneliness. Her wish is for more opportunities for her peers to move in, and she graciously spreads the word about her experience and gratitude.

“I have brought all my friends and my family [to visit], and they’re happy for me,” she said. “Hopefully, they can get some more developments … because it’s needed! It’s really needed.”