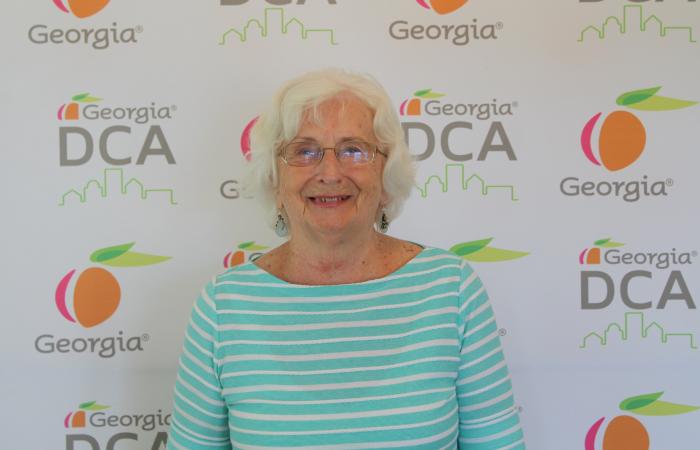 The sunny weather and family brought Lorraine Green from upstate New York to the Georgia coast. She was born in the Adirondacks and lived there with her husband. After he passed away, she was looking for a different environment – preferably warmer.

“We lived out in the country, and the snow was getting too much,” she said. After coming down to St. Mary’s to spend winter with her daughter, Green was able to see construction on the first phase of Winding Road. She recalls thinking, “I like the looks of it.”

After making the decision to make the permanent move to Georgia, Green lived with her daughter for about a year. Winding Road was never far from her mind, and she put her name on the waitlist – and she said it was worth it.

She moved into her “spotless” apartment in 2016, lauding the superior service of the maintenance team. She said, “If you need help, they’re there.”

She adds, “I really enjoy it. It is very nice here. It’s a beautiful, quiet community. And that’s what I like, and I feel safe here.”

Green shared how the staff and neighbors checked on her after she underwent minor surgery. “So that was nice, you know?” she recalls.

Like many residents, Green enjoys the walking trails, saying sometimes they stop and chat when they run into each other outside. The rapport and camaraderie of the neighbors create a strong sense of community.

“We’ve had Thanksgiving here … which is very nice because there are some people that don’t have family around,” Green explained. “And in Phase I, we have a library – all kinds of books to read. That is fortunate that we have this.”

The on-site community room has also been a great perk for residents. Green has hosted holiday dinners and baby showers there and said the staff lets them use it as if it were their very own.

In addition to the support in her residential community, Green also enjoys the conveniences St. Mary’s offers. Being close to pharmacies, restaurants, and other places in the city is an added benefit to the area.

“It doesn’t take me long to go anyplace, like out to eat,” she said. “There are so many places that you can go out to eat and run to the store.”

Friendly neighbors, warmer weather, and safety and security: Green said she truly enjoys living at Winding Road, saying, “When I go to bed at night, I don’t worry about anything.”