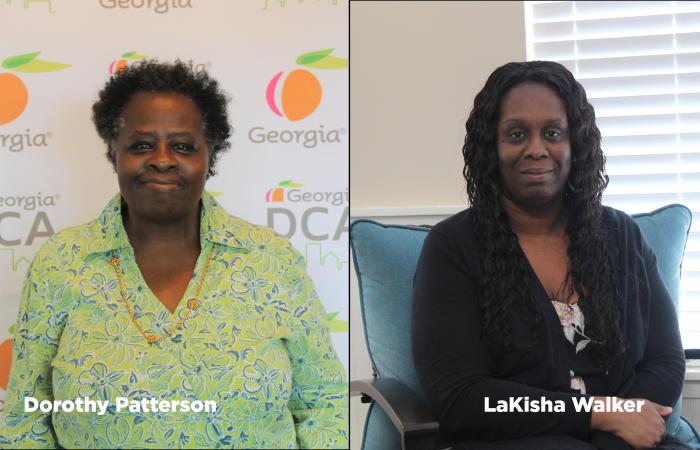 It is here that Dorothy Patterson and LaKisha Walker were able to reinvent themselves. They arrived at Winding Road under different circumstances and have since found a renewed sense of purpose and welcoming community.

Dorothy Patterson called St. Marys home for 44 years, having moved there after she graduated college and got married. When her husband died, she decided to move. It would be the first time she’d ever lived alone so she wanted to feel comfortable in her new residence.

She spent some time living with her son and his family. However, after learning about a new community that was under construction, Patterson had a good feeling about it.

“Well, for one, it was a community for seniors,” she explained. “And, for another, it looked really nice – and I was hoping it would be a fine place for me to live.” She got the keys to her new home in 2017.

A tight-knit community has provided that sense of comfort for which she was seeking. Patterson said, “Well, I’m not as lonely as I thought I would be, and that’s because … I live in this community. The neighbors are friendly, and I’m actually happy here.”

She said they look out for one another which provides an added sense of safety and security.  The walking trail is also one of her favorites.

“It’s kept nice and has a lot of birds and rabbits. It’s a short trail, so I don’t have to walk a long way,” Patterson added.

A professional and helpful staff is an added bonus, and Patterson encourages anyone who is interested in the community to explore it more. With confidence, she said, “I don’t think they’ll be disappointed.”

LaKisha Walker not only found a home but also a new career. She was living in Florida with her mother and sharing a bedroom with her two children. She was expecting her third child at the time and wanted to find a home for her family. In her words, her thoughts at the time were, “This is getting a little crowded here.”

Her sister-in-law, who lives in Warner Robbins, told her about apartments that were under construction and encouraged Walker to check them out. Although some skepticism lingered, she put her name on the list.

Within a week, she got a call from property management. Walker was approved and moved in the summer of 2014.

“When I got there, I loved it. It was so roomy,” she said. Her two-story home provided the room she needed for her family of four.

But she was still in need of a vehicle and employment. The property manager at the time graciously offered her vehicle to Walker for an occasional errand like going to the grocery store.

Walker said, “She didn’t know me from the start; [just] from coming in to fill out the application.” Through a few tears, she added, “I was so appreciative of that.”

This “blessing” continued through an employment offer from Fairway Management, the same company that manages Village at Winding Road. Two years later, Walker said she is going strong.

“It’s a very good company, and they’re really nice and sweet [and] take care of their employees. They’re awesome,” she exclaims.

As she continues to learn the business, from family properties to senior citizens, Walker is enjoying the journey. “I love to learn different things,” she explains. “In life, I use these tools. It’s awesome.”

Georgia DCA @GA_DCA
4 days
The Douglas Fire Department is giving peace of mind to its community with its new ISO rating: Class 2. This rating… https://t.co/wVpPKtSb7d