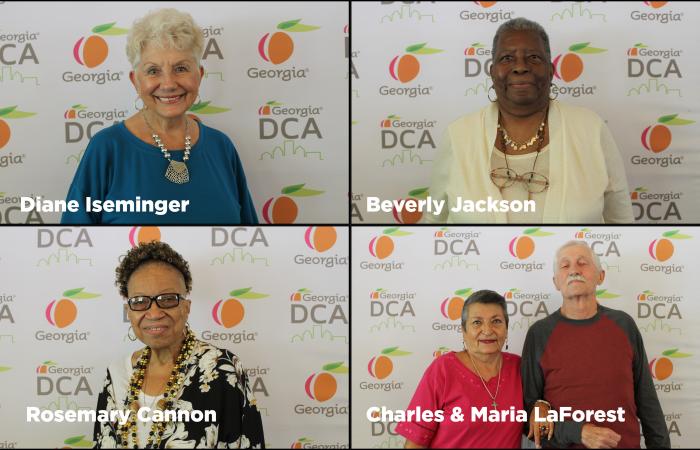 The Georgia Department of Community Affairs believes we all share a common need for shelter. That's why we pride ourselves on laying the foundation for safe and affordable housing. The Housing Tax Credit program makes that goal manifest by offering tax incentives to properties that devote all or part of their units to low-to-moderate income residents. Countless residents, owners, and developers across the state are Breaking New Ground, reinventing themselves in their homes, and seizing the opportunity to begin the next chapter of their lives in safety and comfort in developments such as Hearthside Peachtree City.

Whether they lived 20 minutes away or in a completely different time zone, the residents profiled here have found common ground at Hearthside Peachtree City. Tax credits were allocated for this community in 2012, which has one- and two-bedroom apartments.

Transportation services, movie nights, seasonally themed activities, and plenty of golf carts are among the perks of this special place. Diane Iseminger, Rosemary Cannon, Beverly Jackson, and Charles and Maria LaForest talk about their hometowns and what is now their forever home.

Prior to living at Hearthside, five-year resident Diane Iseminger owned a home that was a 20-minute drive away. So, why did she move?

“Well, I lived in a house and had a lot of upkeep,” she said. “New roof, new air conditioner, new plumbing, new this. And it was too much.”

She saw an ad for Hearthside in the newspaper and visited the property, which was under construction at the time. Iseminger described the location as fantastic.

“You’ve got all your stores, and then more were coming in. You’re near the interstate, near the airport,” she added. So, her plan was in motion: To sell her house in alignment with the opening of Hearthside.

Years of connecting with other residents has resulted in new friendships and her “forever” home. She’s even served as a greeter for new residents as they move in.

Iseminger reflects on her time Hearthside thus far, saying, “You meet so many wonderful people, and they have stories. Some of the stories are like where they lived, who they knew; just kind of make your day. It’s just a great place to live.”

With family nearby, this proud grandmother said it nice having them close. Her daughters and grandsons also appreciate the safety and security that Hearthside provides.

“This has got everything I need,” Iseminger exclaimed. “Elevator, trash chute, mailbox – you don’t even have to go outside … when you have bad weather.”

Another bonus: “The staff is phenomenal.”

Just like Iseminger, Rosemary Cannon has been at Hearthside since 2014 – although she arrived under different circumstances. In 2005, Hurricane Katrina hit the Gulf Coast and Cannon left her beloved New Orleans and came to Georgia. In 2014, she moved to Hearthside. Although she misses the spirit of Louisiana, she said the residents at Hearthside love to have a good time and laugh – something that reminds her of hometown.

“I love it here,” she said. “I love the management. I love everything about it. There’s just so many amenities here.” Her favorite: Breakfast, coffee and tea twice a week! The peaceful environment and friends made are also very special to her.

Just like Holbrook, Cannon’s daughter thought Hearthside would be a great residence. “She said, ‘Mama, I think this is a nice place for you.’ I came, and I applied, and immediately I got in.”

Colorado was home for Beverly Jackson for about 30 years before she made her way back to Georgia. Originally from Macon, she was living in Colorado with her son in an apartment.

“Colorado was a little bit too expensive to live off of retirement,” she said. “So, I thought I was going to go to Bend, Oregon, where my grandkids are but that didn’t pan out.”

Her sisters had moved back to Georgia after living on the East and West Coasts for some time. Jackson began her search to move home, too. After reviewing her options, she reached out to a manager at Hearthside. Jackson initially thought Peachtree City might be too expensive but found the affordable rates at Hearthside would allow her to live in comfort in a great town.

“We got the ball rolling for me to come here,” she said, and wound up moving in two months earlier than anticipated. “It was meant to be.”

Her son came with her to help move Jackson into a first-floor apartment. “It was very nice,” she recalls upon first seeing her new home. “It has been very nice. I’ve met a lot of friendly people.”

She said some people see the building and think it’s a luxury hotel. With a smile, she said, “It’s been wonderful.”

This married couple of 25 years were born and raised in two different countries but now call Hearthside home. Charles LaForest is from Maine and his wife, Maria, is from Mexico. After his brother-in-law passed away, the couple moved back to Georgia to support his sister. They had been living in Peachtree City for seven years and moved into Hearthside in June after a friend told them about it.

“We’re the new guys, but we love the place,” he said. “This is great.” Prior to Hearthside, the two had been renting a house but were becoming overburdened by the demands of yardwork and upkeep.

“At our age, we need to live nice and calm, and [Hearthside] is wonderful,” he said. “For [our] short time here, we really like it.”

One of his favorite perks: The golf carts! Since Peachtree City has 100 miles of multi-use paths, the LaForests take advantage of this special perk of the community.

“Don’t give me streets, please!” he jokes. “We have golf carts and we go everywhere. She [Maria] says in Spanish, ‘Let’s go.’” In addition to visiting other people in the city, the couple also makes sure to have a little something extra on hand when they take their daily treks.

“I know half the dogs in this town,” Mr. LaForest said. “We have dog treats, [and] we have lollipops for the kids. Everyone knows who we are."

Georgia, USA @gdecd
4 days
In the last 6 months, job creation from economic development projects in Georgia was up 40% compared to the same pe… https://t.co/YRBfq4YHk3

Explore Georgia @ExploreGeorgia
2 weeks
RT @HereIsTheWonder: Greetings! Atlanta is a city of wonders. Many of them can be found in @HighMuseumofArt Among the great exhibits mak… https://t.co/5PnTeDZTOE