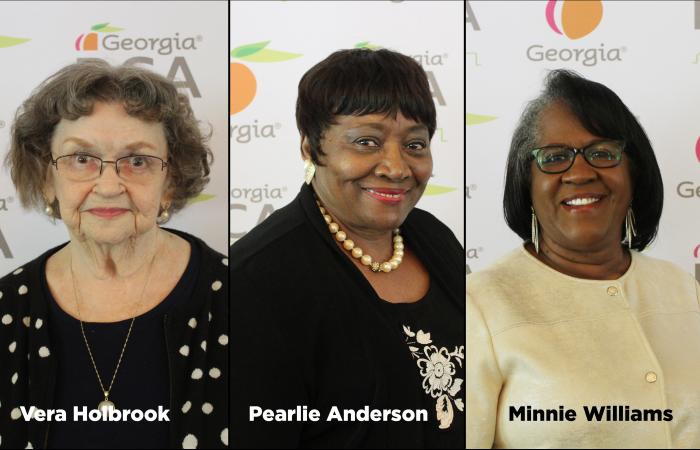 The Georgia Department of Community Affairs believes we all share a common need for shelter. That's why we pride ourselves on laying the foundation for safe and affordable housing. The Housing Tax Credit program makes that goal manifest by offering tax incentives to properties that devote all or part of their units to low-to-moderate income residents. Countless residents, owners, and developers across the state are Breaking New Ground, reinventing themselves in their homes, and seizing the opportunity to begin the next chapter of their lives in safety and comfort in developments such as Hearthside Peachtree City.

Friendly, peaceful, scenic, and “off the chain”: This is how residents at Hearthside Peachtree City describe their experience in this senior-living community for adults 62 and older. These three residents – Vera Holbrook, Pearlie Anderson, and Minnie Williams – share their stories of joy and how this affordable housing community meets their needs.

Hearthside Peachtree City, for which tax credits were allocated in 2012, has one- and two-bedroom apartments While amenities such as a fitness studio, library, media room, and community gardens make for an attractive living experience, simple pleasures like friendly staff, a desirable location, and feeling of community are more than enough for these residents to claim their “forever” home.

Atlanta native Vera Holbrook has lived near Grant Park and a few other places around the city. However, Peachtree City is her new neighborhood. After selling her house, Holbrook moved in with her daughter – who just happens to be a real estate professional with a great place in mind for her mother.

“I think that when we landed here, we thought, ‘This was it.’ And I have enjoyed it since I’ve been here. It’s very nice,” Holbrook said.

Although her family, two adult children and grandchildren, still live in Atlanta, Holbrook said Hearthside is home. After spending time with family, she can relax and enjoy herself in a place of her own.

“Everyone here is so nice,” she said. “This is a great place. I would recommend it to anyone.”

Georgia-born Pearlie Anderson moved to Atlanta in 1962. She and her husband ran a business for about 30 years, but she always found a way to drop down in Peachtree City to shop.

“My goal was to sell the business and buy a house on the lake in Peachtree City,” she said. “But God saw something different.”

After55 Magazine, a publication featuring housing for adults 55 and older, caught her eye. She’d noticed it in restaurants and grocery stores before, but a particular issue caught her eye. It had “Peachtree City” right there in its pages. She called her daughter immediately.

“I was like, ‘Oh my gosh, Lydia. They’re building a [seniors’ place] in Peachtree City. That’s where I want to live,’” she recalls telling her daughter.

Lydia’s advice? “Mama, go for it.” She completed an interest card for the property, and now she’s a resident.

“God answered my prayer,” she said. Anderson was one of the first Hearthside residents, moving on March 14, 2014 – one day after her birthday.

The landscaping, management, and fellow occupants are among the reasons Anderson said she loves Hearthside. She got her lake, too, as there is one near the property. She and a friend have plans to go fishing.

Just like Anderson, Minnie Williams had Peachtree City on her mind. She moved to Marietta after downsizing her home. Although she was living with family, Williams wanted a change.

“Being as independent as I am, I wanted to be on my own,” she said. “So, I talked to some friends that I had previously worked with – we were retired.” They encouraged her to explore senior developments instead of buying another house. Hearthside Peachtree City was one of the recommendations.

“It was a godsend. I wanted to be independent, and this was my opportunity,” she said. Williams moved in June 2017 and said her experience has been awesome and “off the chain.” Delightful people and an incredible staff are two of her many reasons she loves her home.

“This is the place to be,” she exclaims. “It’s peaceful, it’s quiet. The residents are wonderful. You couldn’t ask for better scenery and a better place to live.”

Georgia, USA @gdecd
2 days
We have officially extended the deadline for #GaGEAR nominations until Friday, September 24! Read more about the aw… https://t.co/jLZOfVUroY

Governor Brian P. Kemp @GovKemp
1 day
Georgia is proud to welcome companies like SUNGDO ENG USA and the jobs they create to our state. The Peach State is… https://t.co/LYqoBk9YUE