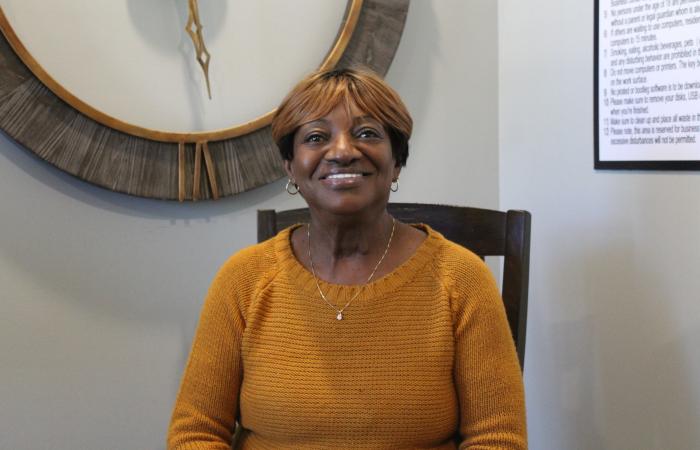 The Georgia Department of Community Affairs believes we all share a common need for shelter. That's why we pride ourselves on laying the foundation for safe and affordable housing. The Housing Tax Credit program makes that goal manifest by offering tax incentives to properties that devote all or part of their units to low-to-moderate income residents. Countless residents, owners, and developers across the state are Breaking New Ground, reinventing themselves in their homes, and seizing the opportunity to begin the next chapter of their lives in safety and comfort in developments such as Bear Creek Village.

Bear Creek Village is a community designated for adults 55 and older located in Hampton. Tax credits were allocated in 2019 for this development. Handrails, washer-dryer connections, and walk-in closets are among the special considerations for the residents here.

Peggy Daniel values her independence, but a health setback had her relying on others for assistance and housing. However, Bear Creek Village has given her a home of her own, along with the freedom to live life on her own terms.

“I was living with my daughter, had some health issues, financial issues, [and] job issues that kind of forced me to have to live with someone for the first time in my life,” she said. “It was not a bad situation, but [one] that I know I didn’t want to remain in. I wanted my own place.”

However, living on a fixed income limited her options. Daniels had previously worked in healthcare as a unit secretary for EMS and Fire Service, before transitioning into the finance side on the billing and collections team. She was eventually promoted to management.

However, working at a desk and sitting long hours at a time began to affect her health, so much so that she had to undergo surgery and physical therapy to walk again. Unable to work at the same capacity as before, she lost her job. Coincidentally her daughter, a long-distance truck driver, needed help with childcare for her then four-year-old.

“It kind of worked out. I needed somewhere. I lost my place,” Daniel said. “So, I became an in-house babysitter. It was a bonding experience. [My grandson] is now 10.”

The desire to have her own place, however, never waned. On a trip to Wal-Mart, a sign about a senior community for adults 55 and older caught her eye. It was for Bear Creek Village. Although it was under construction, she was determined to get on the list.

“I text messaged every week, and I also emailed every week,” she recalled, laughing. “I said somebody’s going to call me because I’m going to wear it out until somebody calls me.”

It worked – she got the call, got approved, and moved in the summer of 2020. She said, “I looked at everything and I just basically claimed it.”

She said the builders thought of everything. From the spacious rooms, bathrooms, and hallways, Daniel was impressed. Something else caught her eye, thanks to her experience from working with fire service.

“You know how old people are, we check out everything,” she said. “We don’t let anything by. There’s a sprinkler in every room, and I think that’s awesome.” Additional safety amenities, such as well-lit areas, provide Daniels with an added sense of security.

“I counted how many streetlights there are, and it’s just lit up. In our age bracket, we kind of want to need to feel safe,” she explained. “You don’t want to be scared to come and go.”

After returning from a family vacation, Daniel had to be dropped off at her home at 4 a.m. Beforehand, her daughter asked if she was afraid.

Daniel said her experience has been awesome and that her family is happy for her. She added, “They knew that I didn’t like not having my own place.” She joked with her daughter, saying, “You’re not getting rid of me – I’m leaving!”

Surrounded by other seniors, Daniel has enjoyed getting to know them. They have a lot in common, including being grandparents, being around the same age, and retired.

“I love it – I absolutely love it,” she said. “And I like the location because I’m close to the family – maybe 15 minutes away.” Her favorite places, like Wal-Mart and Dollar Tree, as well as a few places to eat, are also in close. The lack of heavy traffic is also a bonus.

She’s also found time to explore her interests, such as yoga. After not being able to walk for some time, Daniel is ready to embrace her newfound freedom in more ways than one.

Georgia DCA @GA_DCA
2 min
The Douglas Fire Department is giving peace of mind to its community with its new ISO rating: Class 2. This rating… https://t.co/pcvc3yfnld