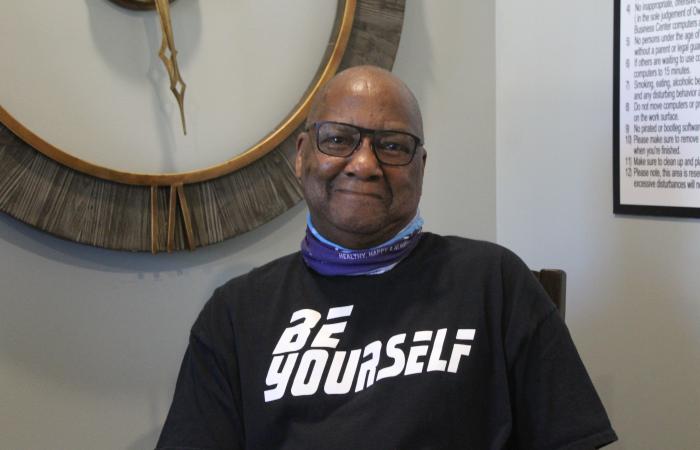 The Georgia Department of Community Affairs believes we all share a common need for shelter. That's why we pride ourselves on laying the foundation for safe and affordable housing. The Housing Tax Credit program makes that goal manifest by offering tax incentives to properties that devote all or part of their units to low-to-moderate income residents. Countless residents, owners, and developers across the state are Breaking New Ground, reinventing themselves in their homes, and seizing the opportunity to begin the next chapter of their lives in safety and comfort in developments such as Bear Creek Village.

Bear Creek Village is a community designated for adults 55 and older located in Hampton. Tax credits were allocated in 2019 for this development. Handrails, washer-dryer connections, and walk-in closets are among the special considerations for the residents here.

Larry Wilson has experienced a lot in his nearly 70 years and is grateful for every lesson learned. From nearly being drafted to Vietnam, getting married and raising a family, and struggling with homelessness, he said making a home at Bear Creek has provided a sense of security and, most importantly, a new family.

“You know, life gets in the way and it interferes with your plan, [your] path, and things that you want to do,” he said. “So, I started over three times. Now I’m in phase four. This is the best.”

Wilson began his journey as a college student when he was drafted into the Vietnam War. However, an error in his classification for eligibility resulted in him being sent back home.

“I don’t regret the path I took because I was in ROTC,” he said. “So, it just wasn’t meant for me to do the military thing, and I went to work. I had a life, I got married, had a couple [of] kids, had a divorce.”

Wilson worked for FedEx for nearly 20 years. Now retired, and living on a pension and Social Security, he was still struggling to make ends meet. He could not afford housing, but a friend had converted her basement into a living space, and he rented there for almost seven years.

“And I lived there, uncomfortably, because I couldn’t afford to do anything else. The finances were not conducive for me to go and get into a really nice apartment,” he said. “And I was able to afford that, until it got out of hand.”

His friend was on the brink of foreclosure, and the COVID-19 pandemic introduced an additional challenge. Wilson said, “The burden of keeping that house fell on me. She increased my rent $320 a month. I couldn’t afford that.”

He moved out in April of 2020, spent the night at a hotel, and then resorted to sleeping in his car.

“You’ve never been tried until you’re forced to do the things that that you think you can’t do. That was a situation that I had to survive,” he said. “So, I made a commitment to just look and try to find some place decent that I could live.”

The pandemic posed several challenges, and Wilson had difficulties finding vacancies in local apartment complexes or even getting his calls returned. He reached to friends for their assistance. He was living in Stone Mountain but expanded his search to other cities.

On the way to his brother’s home, he noticed a sign for Bear Creek Village. The property was under construction, but a number was listed on the signage. Wilson called it, and a man named Mark answered.

“That was perfect, because my brother’s name is Mark. So, he was easy to talk to,” Wilson recalled. They were taking applications. “I said, ‘Oh, this is a godsend.’”

While he was going through the approval process and waiting on construction to be complete, Wilson was still in need of housing. He lived with his brother for a couple of weeks and then drove to Illinois, his home state, to live with his sister.

After six weeks of waiting, he received the good news from Bear Creek Village: He was approved.

“Considering the times … it was tough – finding a place to lay my head down,” he tearfully expressed. “This was just perfect. I’m supposed to be here. This is meant for me.”

The day Wilson moved into his Bear Creek apartment marked the first time he had anything new in his life, aside from a car. That same day, he was warmly greeted by his new neighbors, and “felt right at home.” Wilson praised the thoughtful construction of the apartments as being perfectly built for the senior citizen’s lifestyle.

“Everything is accessible. It makes it so comfortable for people of age, and even those that are physically challenged,” he said. “Just outstanding things like a sprinkler system in every room. This is just awesome. I am proud to be one of their residents.”

The new city also gives him a place to explore. He loves the surrounding nature, the peaceful environment, and the people in his new community.

“The people in Bear Creek Village – it seems like every one of us were selected for this place to be family,” he said. “You get a warm feeling from the people moving in here. And that has not changed. It’s only gotten better.”

He shares his story in hopes of inspiring others facing similar struggles and uncertainty. He knows many people are searching for safe and affordable housing in Georgia and wishes a home for them like the one he found at Bear Creek.

Georgia DCA @GA_DCA
3 hours
Applying for rental assistance through the Georgia Rental Assistance program can stop an eviction. Make sure to c… https://t.co/J4QNcoEttx

Governor Brian P. Kemp @GovKemp
5 hours
Yesterday, I had the pleasure of sharing with @FrontlineGA's Conservative Business Alliance my commitment to protec… https://t.co/mbVrf8CS5Y