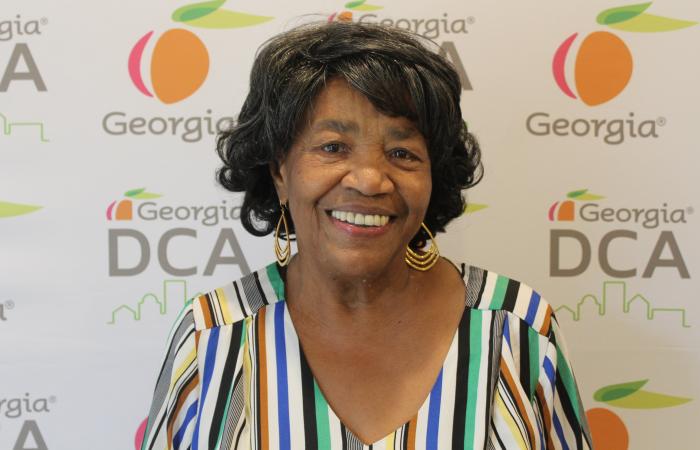 After living in Jamaica for nearly 25 years, Lewis returned stateside to Georgia. Her health was a priority, and her children wanted her to be closer. She found an apartment but soon discovered that it was plagued with drug activity and other crime.

“I was looking to scale down after retirement,” she said. “I wanted to be with seniors.”

Luckily, the property manager knew Lewis needed change and recommended Abbington Perimeter. Although she passed the complex occasionally, Lewis had not considered moving there – but she’s glad she did.

“I came here, and here I am, and I’m very grateful,” she said. Lewis is now closer to her children as well as the medical facilities in which she frequents.

Lewis is originally from North Carolina. Returning to the United States after living in another country for more than two decades was a difficult transition, one that the staff and fellow residents at Abbington Perimeter helped her navigate.

“They have met my needs. They introduce me to different things that seniors can get,” she said. “We have physical ailments and things that we need to take care of. I didn’t know [anything] about Medicare, or any of that, when I came from overseas. I knew it [existed], and I got it, but I was overseas 24 years.”

Lewis said she was lost – “It was like moving from the country to New York” – but not anymore. Senior citizens in the community took her in and guided her on getting insurance, and staff members provided essential information about the bus system so she could get around.

She’s also found a loving and protective community – a sharp departure from her previous living conditions. They look out for each other – something of which Lewis is appreciative.

“I think we are close-knit because we know we need each other,” she said. “I like the fact that we are all on the first floor mostly, so you don’t have to climb the stairs. We do things and motivate each other to continue to move forward.”

Abbington Perimeter is more than a place to live for her. Despite her initial doubts about an affordable housing development, she said it exceeded her expectations.

“I had a wild imagination, but the place was nice [with an] open concept. It took the stress and strain off of me, that I could get help and assistance,” she explains. “So, I’m happy. And I love my apartment.”

Her independence is also important – as well as that of the senior citizen community. As a woman in her 70s, Lewis said she is quite capable of taking care of herself and doesn’t want her children to have to be responsible for her.

“I think they need to make affordable housing for our community – so we can have nice things, too,” she said. “This has been a pleasure for me to find that it was nice. So, senior people need a place to live. There’s a lot of us from the ’60s – we didn’t die.”