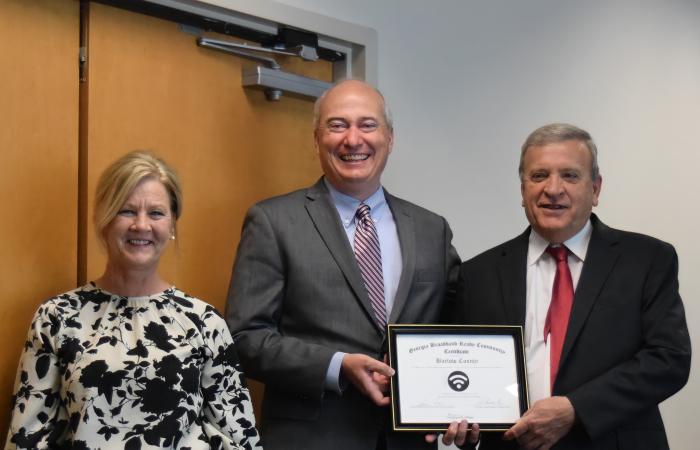 Bartow County has recently been announced as Broadband Ready, receiving a certification from the Georgia Department of Community Affairs (DCA). The designation recognizes a city and/or county whose local government has completed the application and demonstrated compliance with the adoption of a local comprehensive plan inclusive of the deployment of broadband services and a Broadband Model Ordinance.

There are several rural areas not covered by major internet providers. In North and Southwest Bartow, residents experienced slow to no service at all. As individuals were working from homes faced this issue or dealt with excessive costs for high-speed internet, Commissioner Steve Taylor began discussing the need to expand broadband access early in his first term.

“COVID had a negative impact on productivity for those unserved or underserved rural areas,” he said. “Those individuals that found themselves trying to work from home or children who were attempting to log in for virtual learning had very poor connection, slow internet speeds, or had no service at all.”

While applying for the designation, the online application was simple and only took a short time to complete, said Taylor. DCA reviewed the Comprehensive Plan submitted by Bartow County and ensured that they met the eligibility requirements.

“Certainly, the quality of life in rural Bartow County will improve if we can provide better internet access to businesses, educators, students, and individuals,” Taylor stated when asked how Bartow County will benefit from the designation.

The improved broadband will allow residents to gain access to the world and resources they’ve not had before. For other cities across the state who would like to apply, Taylor shares that it is worth reaching out to DCA to see if they are eligible.

At the Bartow County Broadband Ready Community Designation on April 14, DCA Commissioner Christopher Nunn mentioned the excitement from seeing the new progress in the county, noting the commitment from the community and good leadership.

“We’re here to recognize the planning that has gone into addressing the needs,” Nunn said. “This designation is recognition of the work that has been done but also is an important tool to tap into state resources.”

Taylor says that the designation acts as the next step to enable all of Bartow County to look up to broadband. The quality of life for the citizens will be in proved as well as an advancement for the community.

“This is an important next step for us to completely cover all of the county for economic development and our school systems,” Taylor said in his closing statements.

Georgia DCA @GA_DCA
2 days
Keep your utilities on this Summer by beginning your application today! The GRA Program covers 18 months of rent &… https://t.co/A5RiIaUS9D

Governor Brian P. Kemp @GovKemp
1 day
As we celebrate this July 4th, we’ll also be thinking about those who aren’t able to be w/ loved ones, like those m… https://t.co/5LHLbOfopt