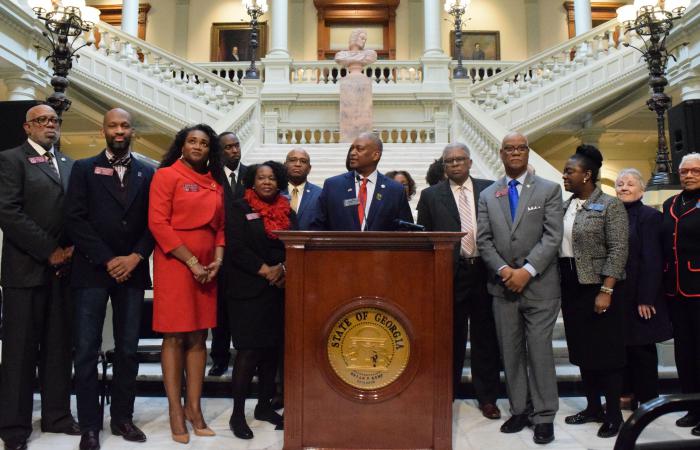 Members of the Georgia legislature, media and the public, as well as notable officials and guests, gathered Jan. 17 to honor the legacy of Dr. Martin Luther King, Jr. at the 35th annual state commemoration. Gov. and First Lady Kemp; Commissioner Christopher Nunn of Georgia Department of Community Affairs (DCA); the Rev. Bernice King, youngest daughter of Dr. King; and a host of dignitaries and guests were on hand for this occasion.

This annual event is hosted by the Martin Luther King, Jr. Advisory Council and represents a partnership between DCA and Georgia General Assembly. Gov. Kemp expressed his gratitude for this tribute and reminisced on several years of attending this event throughout his service to Georgia during his time as a state senator and Secretary of State.

“It reminds me of that the great thing about our state is our people, and none are more worthy of recognition than Dr. King. [He] was a transformational leader with so many great accomplishments,” Gov. Kemp said. “He put his dreams ahead of personal comfort, and he persevered in the face of adversity. He reminded us that moving forward is an obligation, not an option. And in advancing his vision, he not only bonded people together; he marched arm and arm with them.”

Gov. Kemp said paying homage to Dr. King allows Georgians to reflect on the leader’s powerful and perpetual legacy. He also noted that Dr. King is not only memorialized at the Capitol building with a statue but also around the world.

“He changed our culture forever,” Gov. Kemp said. “Our world is blessed with his dream.”

Nadia Theodore, Canadian Consul General, served as the keynote speaker and made multiple connections to Georgia, her country, civil rights and Dr. King. She was asked to serve as this year’s keynote speaker due to a “serendipitous” conversation about the Underground Railroad with Sen. Emanuel Jones, chairman of the Martin Luther King, Jr. Advisory Council. Theodore recalled, “We discussed how Canada symbolized hope for enslaved African-Americans when freedom seemed unattainable.”

Using Dr. King’s words, she elaborated on the deep connection between the United States and Canada regarding slavery: “Deep in our history of the struggle for freedom, Canada was the North Star. The Negro slave – denied education, dehumanized, [and] imprisoned on plantations – knew that farther to the North a land existed where fugitive slaves [who] survived the horrors of the journey could find freedom. Heaven was a word for Canada, and the Negro sang with the hope that his escape on the underground railroad would carry him there.” She added, “The actions between African-Americans and Canada during the Movement has defined our relationship and reverberated across generations.”

Theodore also drew additional parallels to both countries by highlighting prominent Black Canadians such as Abraham Beverley Walker and Viola Desmond. Walker was a journalist, civil rights activist and the first Canadian-born black lawyer who had roots in Atlanta. Viola Desmond was dubbed “Canada’s Rosa Parks” due to her refusal to leave a “Whites Only” area in the country. Today, her face appears on the Canadian $10 bill.

Dr. King also left his historical mark in the northern country. In 1967, which also marked Canada’s centennial, he was asked to record speeches for the Canadian Broadcasting Corporation’s (CBC) Massey Lectures. Still in existence today, this lecture series features recorded talks on political, philosophical or cultural topics and are delivered by a noted scholar. Theodore said he was the “ideal choice.”

“The high regard that Canada has for Dr. King is not only in his post-assassination legacy,” she said. “We were very much engaged in his philosophy during his lifetime.”

Dr. King was asked to participate in the lecture series due to the persistence of Janet Somerville, a CBC staff member. Somerville was featured at this year’s event via a recorded message for attendees in which she reflected on her time with him.

Theodore said Somerville worked with the civil rights leader to make sure he would be unapologetic about conditions in the United States and effects on other countries. In this series of lectures titled Conscience for Change, Theodore said, “Dr. King spoke of his emerging vision of the American Civil Rights Movement as part of an international freedom struggle against economic exploitation, the poor and disenfranchised.”

Theodore said she has been inspired by Dr. King as long as she can remember and wants to use her platform to demonstrate his key messages.

“Today, as one of the few women of color and the only Black woman to represent my country abroad as head of diplomatic representation, I aspire to his example of leadership, integrity and fortitude,” she said. “I embrace the commitment to the pursuit of equity and human rights, not for any one marginalized group, but for all people.”

The event culminated with the unveiling of an interactive Civil Rights display. This initiative reflects a partnership with the Center for Civil and Human Rights. Located in the Capitol Museum, the display consists of three 65-inch screens which showcase Georgia’s role in the Civil Rights Movement, women’s suffrage, and more causes spanning from 1920-70.

Explore Georgia @ExploreGeorgia
11 hours
Paper maps are making a comeback! Did you know you can get a FREE Georgia road map at any of our Visitor Informatio… https://t.co/rwNF2BhPsn